“On 24 December 2012, towards 6pm, Sultan Qaboos bin Said stepped out of his limousine against the backdrop of a Muscat sunset and paid a royal visit to the German University of Technology in Oman (GUtech). The recently completed building had received several awards and, after two changes of location, the GUtech had at last found its new home.
The idea of founding a university in Oman was initiated in 2003 by former Vice-Chancellor Prof. Michael Jansen and Chancellor Professor Burkhard Rauhut of the RWTH University in Aachen, and Shaikh Abdullah al Salmi, Minister for Religious Affairs, during the Sheikh’s visit to Aachen.
The Al-Salmi family and experts in the history of urban planning from the RWTH swiftly set to work on a plan that led to an application in 2005 to the Omani Ministry of Science for a licence. This was granted in principle by June 2006, and on 26 December 2006 the treaty of collaboration was formally signed by Prof. Burkhard Rauhut as Chancellor of the RWTH Aachen and Abdullah Salim al Salmi as head of the newly-founded organisation Oman Education Services LLC (OES). In the autumn of 2007 the first preliminary courses began to be taught.
In 2017 the German University of Technology celebrated not only the fifth anniversary of the royal visit but also the tenth anniversary of the start of teaching.
This book describes chronologically the exciting developments in the first ten years of a private initiative by the al Salmi family, which has confidently joined with the RWTH as sole funder and as an academic partner.
Today GUtech is considered to be one of the best scientific universities in Oman.” (Olms Verlag)

More information on the book can be found here.

ICWA Webinar on “India and Africa Looking Ahead: Contemporary Realities and Emerging Prospects” 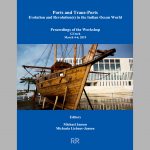 Proceedings of the “Ports and Trans-Ports” Workshop (Digital Version)